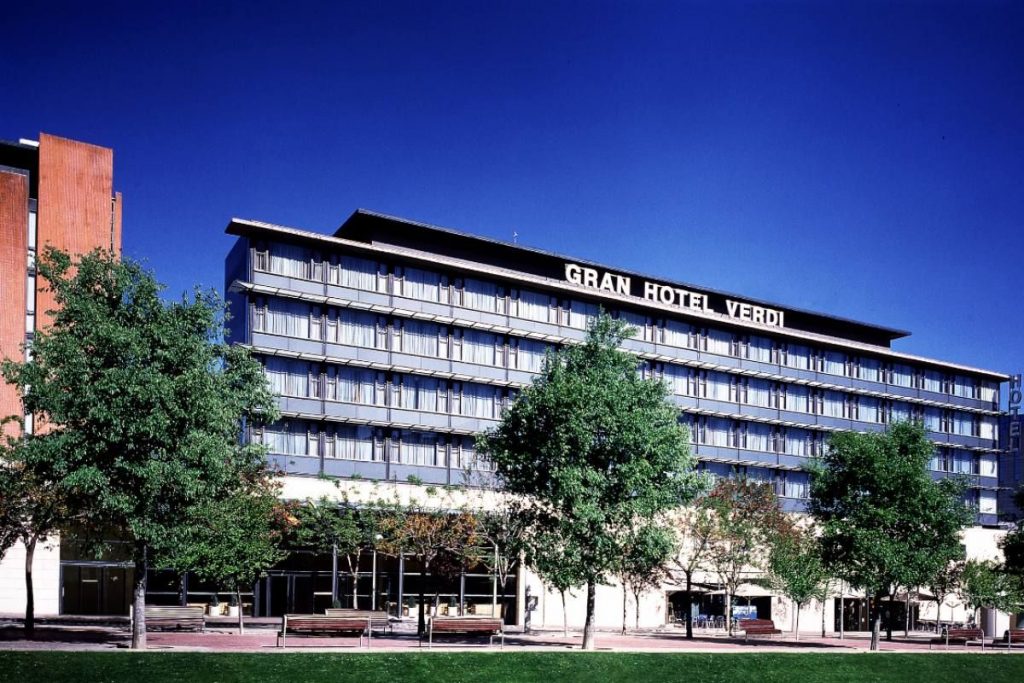 The transition from Hotel Verdi to Acute Hospital with Home Hospitalization

I want to start this article with a few words of gratitude  to our hosts on this adventure and to state that without their support the transformation of a hotel into a hospital would not have been possible.

We had, at all times, the support and warmth of the staff of the Hotel Verdi.

We have been cared for and pampered in the form of trays of chocolates and gallons of orange juice with tangerine, the days when we didn’t even have time for lunch, and fruit trays when breakfast time didn’t allow for coffee. We love the chocolate cupcake trays! 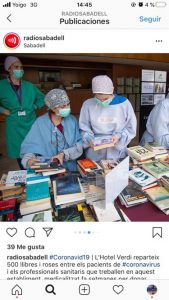 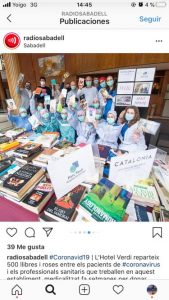 The maintenance staff we tortured until we learned how to turn off the heating in the rooms.

All hotel staff collaborated with books and roses for patients and professionals on St. George’s Day.

Thanks. Thank you so much.

But how was it to open a hospital in a hotel?

Everyone when talking about a hospital and in particular our Sabadell Hospital, Parc Taulí, thinks of this image but if you stop to look you can see that it is just a building. What makes it different from other buildings and other hospitals is the people we work with. 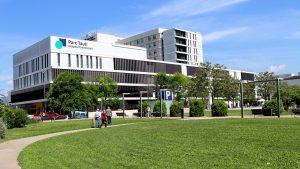 We are based on this idea by Home Hospitalization professionals to take the Hospital to patients' homes.

It all started with the order of the Hospital Management in the Home Hospitalization Unit to open a space for people who were recovering from COVID-19 and could not, yet, be donated high. The pressure was significant and needed to be done well and quickly. In just over two days it was launched with the collaboration of everyone.

HaD professionals met at the hotel and decided on the distribution of the clean and dirty areas and the tools we would use to care for these patients. We had the help of our leading care manager, Marta Fernàndez Ros, who already had experience in transforming other units of the Hospital and who would be our coordinator, Elisenda Carrau, with direct contact with the Management of the 'Hospital i facilitator of all the circuit gear with Hospital and CatSalut.

We are a team used to working together for 20 years. This made it easier for us to decide in just 30 minutes what the new hospital would look like. We are used to working with what we have. We know that the environment has many functions. So a door can be one serum stick and a suitcase one May table.

The hotel reception became the clean area where the admissions administrator, the security guard, the hotel guard staff were and where the clean uniforms were collected. 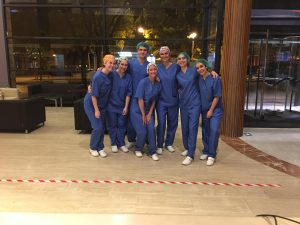 The mezzanine floor, where the banquet halls were located, was transformed into the exchange area. Work and rest areas were created with panels, which usually separate the convention halls. 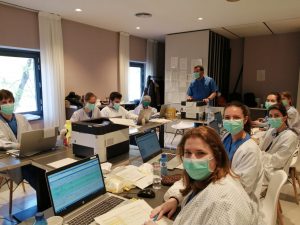 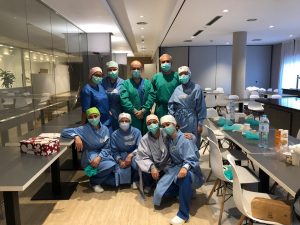 The changing rooms were the public toilets. The second day one appeared donkey to hang clothes. The self-service furniture was chosen as small lockers to leave water, sandwich or bag, a space of 30cmx30cm shared between two or three. We brought our coffee maker from the office, as if it were a link to the place of origin, even though we had a hotel coffee maker. The elevators were distributed, the one on the left for the staff and the one on the right for the sick. That is, one clean and one dirty. 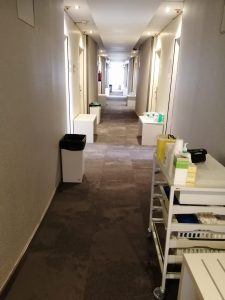 Upon entering the floors we could see that there was no room 13 or 18. Some had double beds and almost all had two beds. 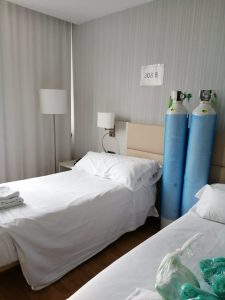 There were also two smaller single rooms. It was decided that one would be the nursing control and the other the warehouse, in slang. ikea of the plant, although it was an excursion to go to look for material. 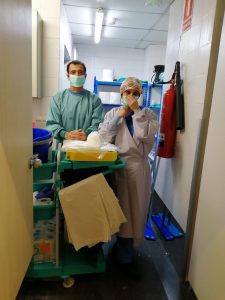 The void was access to the elevator of the hotel staff and also cleaning products store. It had a tap that with a bucket was used to wash the material that had to be bleached. 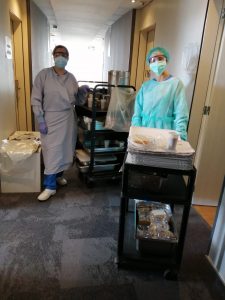 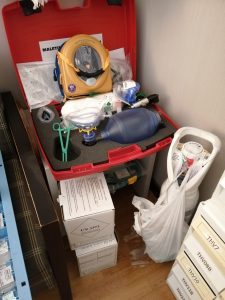 At the nursing check we put a red suitcase with Ambi®and the stop car material with a DAI and a vacuum cleaner which was one of the first things we assembled. The closet was an emergency warehouse and we shared the toilet with the lab supplies in the tub and the draped cloths where the towels should go. “The electros device”It had to be plugged into the warehouse toilet. The computer service of the hospital placed computers and connection with the patient's medical history just like when we go to the patient's home with HaD.

The nursing staff did and passed a course on medication management at the clinic station on a Saturday afternoon thanks to the support of Manoli Macarro.

Everyone worked at one. If you found a shortcut or made a change everyone could enjoy it. Behind it was a much more important goal as a patient to take the indicated medication or diet on time.

The first problem to be solved was the issue of “room bell” which we solved by giving the patient the mobile number of the referring nurse and if they did not have a telephone, calling 7 which was the reception. 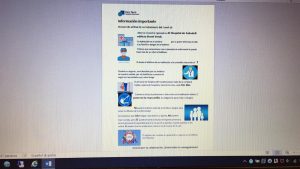 The next day, a group of senior year nursing students and residents waiting for a place joined the team. All of them had volunteered.

At first we had our doubts. They were staff unaccustomed to patient care and this could be a problem or not. 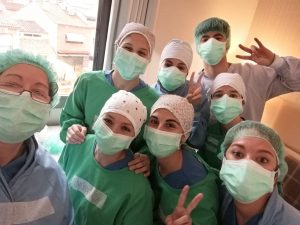 One of four nursing groups

We are used to working with caregivers of patients who turn on and off intravenous treatments who care for and handle negative therapy pumps without problems. That was an advantage because that’s what we did: educate them as if they were caregivers.

First of all we harassed over and over again how to get out of the patient’s room without taking the Coronavirus with us to clean areas. Clean the door handles on the outside and inside, then remove the leggings, outer green robe, gloves, goggles in a suitable needle container, ..
Another problem was the use of bleach in an area where parquet and carpet predominated, without damaging the space. We solved it with disinfectant wipes and leggings. 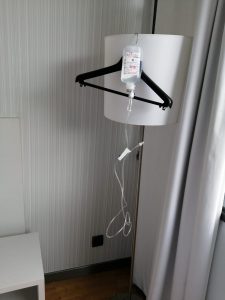 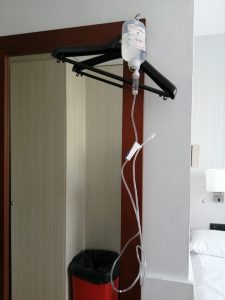 More than a mirror

The pictures on the wall, the floor light, the mirrors and the doors were used to hang serums or intravenous treatments with the hangers in the closet, as they did in the patients' homes if we did not have elastomers.

The furniture intended to put the bags in the room was adapted to put protective material in the hallway and food trays. One every two rooms.

Carts were moved for care material and we took advantage of a clothes cart so that the patient could throw away the leftovers of the meals while maintaining the rules of infection control. 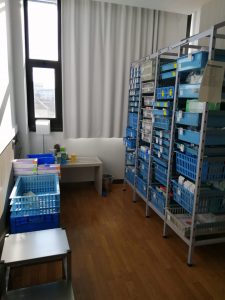 Warehouse set up an “Ikea” of expendable material and we selected what material was basic to have as we couldn’t have everything and didn’t have the option to go to another floor if we were missing something. The usual emergency medication was selected first and basic material that could have several purposes instead of too specific material.

Now it was necessary to create the circuits….

All entries by: Eva A. Sánchez Martos
A pandemic that has changed our lives.
Of the creation of circuits