Induction of labor is the administration of drugs and the use of obstetric maneuvers in order to begin labor.

Induction may be indicated in some situations, for example:


The drugs used in an induction depend on the condition of the woman's cervix (degree of softening, shortening and dilation) and the degree of attachment of the fetal head.

Depending on the condition of the cervix and fetal head, it may be done with prostaglandins or directly with amniorexis and oxytocin.

'Pharmacological induction', d'Virtual Nurse, content under license CC BY-NC-ND 3.0 ES, with modifications made by the Gynecology and Obstetrics Service of the Hospital de Sabadell

Birth stimulation is about administering oxytocin to the pregnant woman, usually intravenously, with the aim of provoking contractions or of increasing their intensity and frequency in order to accelerate labor, in the case that it is in a latent phase.

'Non-pharmacological induction', d'Virtual Nurse, content under license CC BY-NC-ND 3.0 ES, with modifications made by the Gynecology and Obstetrics Service of the Hospital de Sabadell

It is a technique used to see the color of the waters, when the membranes have not yet broken, using an apparatus called an amnioscope and a lamp. It is a procedure that is rarely used due to the existence of other methods of fetal control.

'Amnioscopy', d'Virtual Nurse, content under license CC BY-NC-ND 3.0 ES, with modifications made by the Gynecology and Obstetrics Service of the Hospital de Sabadell

Amniotomy is indicated in the induction of labor, in the passage of birth, and when there is a suspicion of a loss of fetal well-being after assessing the color and amount of water.

'Amniotomy', d'Virtual Nurse, content under license CC BY-NC-ND 3.0 ES, with modifications made by the Gynecology and Obstetrics Service of the Hospital de Sabadell

It is an incision made in the vagina to expand the space and thus accelerate fetal outflow. It affects the skin, muscle and vaginal mucosa and requires suture once the fetus and placenta have left.

The episiotomy is performed with scissors during the expulsion phase, at which point the cephalic presentation of the crown occurs, that is, when the fetal head exits and presses the perineum. This is usually done under regional or local anesthesia. The WHO questions its indiscriminate use and recommends restricted practice, considering each case individually.

Episiotomy is indicated when the birth attendant thinks it is necessary, usually in the following cases: 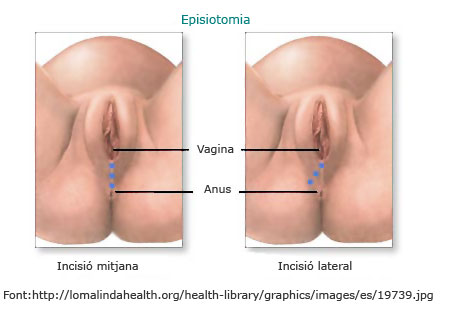 El perineal massage prenatal during the last weeks of gestation is effective in preventing perineal trauma and episiotomies, especially in women expecting a first child or having undergone an episiotomy.

'Episiotomy', d'Virtual Nurse, content under license CC BY-NC-ND 3.0 ES, with modifications made by the Gynecology and Obstetrics Service of the Hospital de Sabadell

These are the use of forceps, Thierry's spatulas or the vacuoextractor or obstetric suction cup to shorten labor and speed up birth. Instrumentation may be needed in the following situations:


Obstetric instrumentation can be done with the instruments described below:

The forceps are metal claws, fenestrated, formed by two branches that connect to each other. These branches are inserted apart into the vagina and placed one on each side of the fetal head; then they articulate and the fetal head is rotated, on which traction is exerted until it exits. It is a contraindicated instrument in premature, due to the pressure exerted on the head. To practice this technique, anesthesia should be applied, the water pouch must be broken, the dilation should be complete and the fetal head should be located in the lower strait of the pelvis. 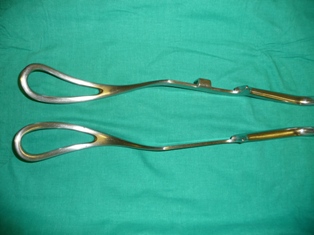 Thierry spatulas or spatulas are two metal spoons that act as a shoe or slide for the fetal head. Unlike forceps, these spoons do not hinge or push, but instead expand the vaginal space to help the fetus descend and exit. The criteria for application and the complications are similar to those for the use of forceps, although there is an increased risk of injury to the maternal tissues. 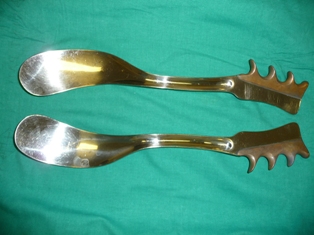 This is a cup or bell that is placed over the fetal head, in which a negative pressure is applied until the vacuum is reached. The vacuum causes the cup to attach to the head of the fetus and to allow for traction, intermittently and synchronously with the uterine contraction. It takes about 10 to 20 minutes to reach the progressive vacuum, so this instrument is not used in case of acute fetal suffering, which requires rapid removal. The suction cup can be applied without anesthesia.

The vacuoextractor is indicated in situations similar to those that apply forceps and spatulas, but with the limitation of time; therefore it is not recommended in emergency situations. Nor can it be used in premature because of the negative pressure it exerts on the head, as it increases the risk of the baby having an intracranial hemorrhage.

The suction cup has less maternal complications than the forceps or the spatulas. Fetal complications include: lesions in the area to which the cup is attached, cephalohematoma (accumulation of blood under the scalp that spontaneously resorbs in a few days), and intracranial hemorrhage. 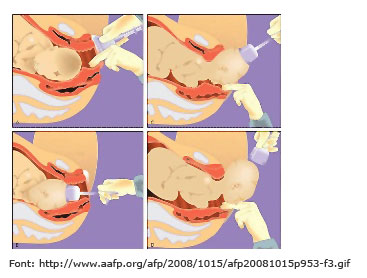 'Obstetric instrumentation', d'Virtual Nurse, content under license CC BY-NC-ND 3.0 ES, with modifications made by the Gynecology and Obstetrics Service of the Hospital de Sabadell

Cesarean section is a surgical operation that aims at the birth of the fetus and the removal of the membranes and placenta through the abdominal cavity. The approach to the fetus is usually through a suprapubic transverse incision, called the Pfannenstiel incision. The skin can be sutured with staples or nylon thread, which must be removed seven to ten days after surgery; the internal sutures resorb over time.

The intervention takes approximately 30 to 60 minutes and is usually performed under regional anesthesia (epidural or spinal cord), with the advantage that the mother is fully aware and can see the newborn immediately. General anesthesia is rarely needed.

Medical advances have made cesarean sections more secure, but maternal and fetal morbidity rates by cesarean section are still important when compared to those for vaginal delivery.

'Cesarean section', d'Virtual Nurse, content under license CC BY-NC-ND 3.0 ES, with modifications made by the Gynecology and Obstetrics Service of the Hospital de Sabadell

Apart from the obstetrics, there are a number of general interventions that take place in the delivery rooms.

Therefore, fasting during childbirth is a disused practice, which can lead to complications:

'Other interventions', d'Virtual Nurse, content under license CC BY-NC-ND 3.0 ES, with modifications made by the Gynecology and Obstetrics Service of the Hospital de Sabadell 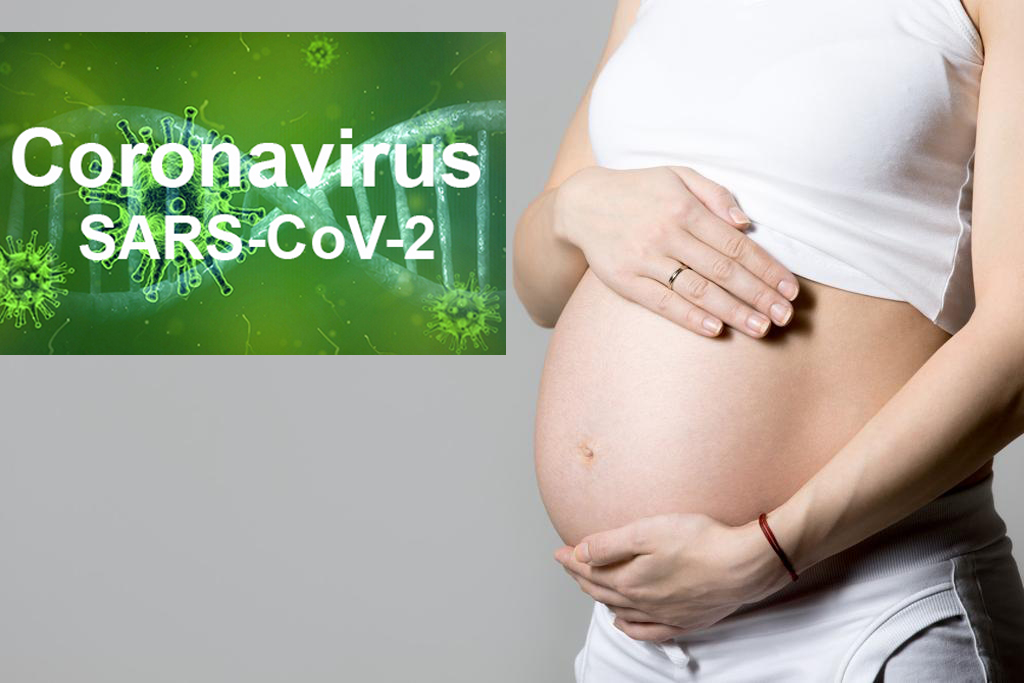 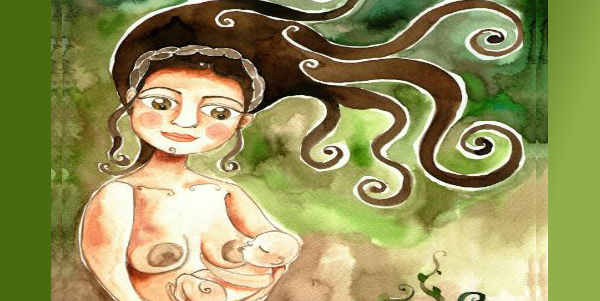 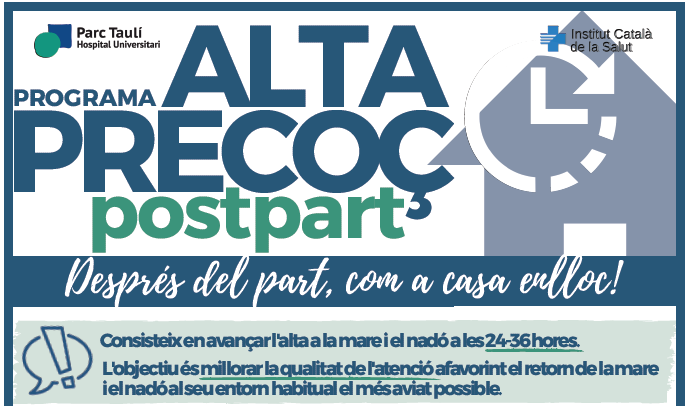 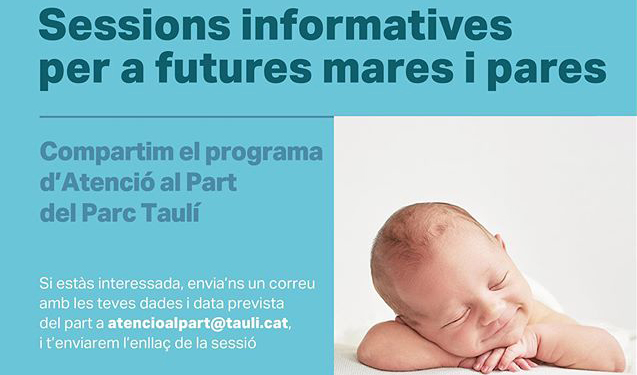