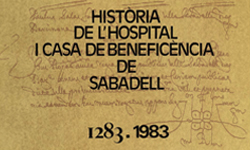 The Parc Taulí Hospital Consortium was created on October 13, 1986 under the auspices of the Department of Health of the Generalitat de Catalunya, Sabadell City Council and the entities that own the Sabadell clinics: the Caixa d'Estalvis de Sabadell, Sabadell Mutual and the Sabadell Hospital and Charity Foundation, which joined in an unprecedented decision in which the Autonomous University of Barcelona played a key role.

The Consortium was born as a Consortium for the Management of the assets transferred for use by the entities, with the following foundational commitments:

The complex process of merging public and private centers with very different characteristics and cultures led to the reorganization of the different organizational charts into one and the homogenization of salaries and more than 60 pre-existing schedules and the search for a new culture that is typical of the new institution.

Consolidation. Increase in quality and quantity. 1990-1994

Priority is given to the creation of central services, which are essential to ensure rapid and reliable diagnoses that were non-existent or very underdeveloped in the previous stage.

The inauguration of the Diagnostic Unit for High-Tech Imaging, UDIAT in 1992 marks an important technological advance.

The Fundació Parc Taulí was set up in May 1993 with the aim of promoting the development of professionals' knowledge and supporting all teaching activities and research projects.

The fulfillment of the founding commitments makes it possible for the entities to hand over their assets, valued at 27 million pesetas, on March 1995, 6.135, an essential requirement to be able to start the Parc Taulí Planning Project and adapt the structures to be able to attend to patients with a global approach to their health problems.

These are 10 consecutive years of budget balance with a significant increase in quality and quantity of assistance.

During 1996 and 1997, activities were organized in Parc Taulí and 6.000 m2 were built and 15.000 m2 were rehabilitated. The demolition of the Santa Fe building and the construction of a new facility that will respond to the growing trend in outpatient activities is still pending for the second phase.

From Hospital Consortium to Health Corporation: 1998-2000

On 7 January 1998, the decree of the Department of Health and Social Security was approved, amending the wording of the Statutes of the Hospital Consortium, which was renamed Corporació Sanitària Parc Taulí de Sabadell.

During 1998, at the end of the 1st phase of the Planning Project, progress was made in consolidating a governance model for all the institutions in Parc Taulí that would allow them to respond with quality and efficiency to care needs while guaranteeing the viability and sustainability of the institution.

In addition to the centers with their own legal personality –UDIAT, Sabadell Gent Gran i and Atenció Primària Parc Taulí–, the Hospital de Sabadell, l’Albada and Salut Mental are consolidated as centers of the corporation with decentralized management.

Organizational stability and rooting in the city

Parc Taulí is entering a phase of maturity and organizational stability, and is deepening its roots in the city with projects such as the Parc de Salut y Salud en Xarxa.