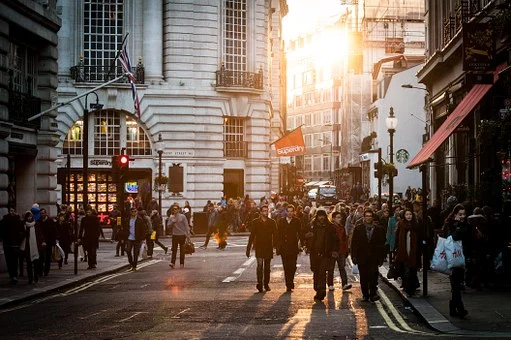 Of new professionals coming to the HaD. Martha

During the pandemic, the first to become infected were health professionals. Doctors and nurses who had been in front of the care units for many years and who were overwhelmed by a virus that caught us all unawares and with a significant lack of information about how it was spread.

On the other hand there were final year students who wanted to help. Some of the nurses had been students in our Home Hospitalization unit and did not hesitate to contact us to lend a "hand". One week later, the government gave legal status to the possibility of incorporating pre-retired professionals and final-year students into employment.

This is how six nursing students and nine medical graduates arrived at our unit pending the choice of MIR place.

Today I will introduce you to Marta, a nursing student, young, thin and similarly fragile but with a very strong personality and very clear ideas of what she could do and what not and how she could help and how not. Thanks to professionals like her, it was possible to provide care to almost 300 patients who passed through the HaD medical hotel at the Parc Taulí Hospital in Sabadell during the month of April 2020. 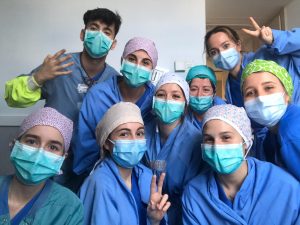 But we ask them.

Marta, at the time the state of emergency was declared did you think you would have the opportunity to care for patients as a nurse?

At the time the state of alarm was declared, many doubts and uncertainties arose about how I could help from the point that I was still a student. I thought that the tasks of a nurse as such could not be done due to the fact that I am not yet a graduate or college student, so there were tasks that I could not perform. On the other hand, I thought I was quite prepared as during the race we did a lot of internships, saw a lot of things and had different experiences. I took it as an opportunity and thought it would be like doing some sort of ‘internship’ for a few months until the month of June came and I got my college degree. I saw it as an internship as at all times I would be under the responsibility of a referring nurse and she would be the one to delegate to me the jobs and things she thought she could do. As a student I still can’t do certain things or make decisions based on what decisions, just as I can’t take on a certain number of patients on my own.

What was it like for you to face COVID patients?

At first I was very scared as I knew that once I started working I would start to be exposed with the direct consequence of exposing my family as well. However, when they gave us the informative talk and told us what our job would be and what kind of patient we would care for, I was reassured. We were assured that the patient profile would be a mild COVID and that we would maintain minimal contact with him. This helped me to cheer myself up and finish making the decision to accept the job.

Did you think about the possibility of being able to bring the infection to your family?

Yes, because even if you are vigilant at all times and are waiting to take the necessary measures you can always have an unforeseen event or get confused for a few seconds. Still, I think I’ve always been very conscious and I’ve taken the necessary steps in a pretty correct way. When we finished the shift I washed my face and neck well and the first thing I did when I got home was go straight to the shower and wash my whole body and hair well especially. Regarding the measures we have taken at home, these have been to maintain the minimum contact with my parents and my sister and match as little as possible. For example, at meal time they have continued to dine together at the table and I would sit on the couch or go to my room. I used a hand towel for myself and all the toiletries were personal and separate from the rest.

Did it cost you to learn the special infection protection measures?

No, as days ago students received specific training on the placement and removal of EPIS. The point was to be clear about the concepts and practice it a couple of times to finish assimilating it. At all times you need to be aware of what you can touch and what you can’t, as well as reflect on whether you are well protected or missing something. It is important to protect yourself but also others and our peers.

What made you more respectful, nursing duties or the possibility of becoming infected?

The truth is that what made me most respectful was the possibility of becoming infected because if I accepted the job I would start to be more exposed. Regarding nursing duties, I had more confidence as throughout my college career we have done a lot of clinical internships and I felt quite prepared. He was also influenced by the fact that he knew that we would treat mild COVID patients, so the contact we were going to maintain with them would be minimal, the medication that would be administered to him would be all oral and not intravenous, we would only be in contact with those patients. that they had to take their blood pressure, put heparin, among others… the other functions were to be more basic tasks such as taking oxygen saturation, giving a bag with oral medication or giving them in hand the tray with the food.

Which situation, of the ones you saw, would you highlight as very hard?

The first two days impacted me. The patients arrived at the same time with a bus from the Taulí and the truth is that we did not reach. Everything was new for everyone and there were some management issues that caused a slowdown in work.

All professionals had to adapt to the new situation and we had to learn to work with each other. Little by little things improved but the first few days were tough. We took care of the floor two nursing students and one referent nurse, all the rooms were occupied and were doubles. We had a lot of work at all hours and rest times were minimal. The truth is that I came home and I felt very fulfilled but also very exhausted and eager to rest.

The following week, however, the addition of another student and another referring nurse helped reduce overwork and streamline everything. The days have passed and we have learned how to work with other colleagues and we have made a very good group and team.

Do you have special memories of any patients? Which one?

Yes, there have been situations of all colors, from sad moments to very funny anecdotes. I often remember a patient who was precisely one of those who arrived on the first day by bus. It surprised me as I was a young girl and it was the first case of COVID that I saw that did not affect an elderly person. It gave me many good times because despite being in that situation of illness, it transmitted a great vitality and an incredible desire to live, recover and have fun… the positive thing is that he managed to transmit this energy to his roommate, who was an older lady who was in worse health and had a harder time doing things and moving around the room. During the admission it was her birthday and it was a joy for everyone to be able to see her reaction to receiving the bouquet of flowers her husband sent her at the Verdi Hotel. In addition, it was very exciting to know that the day they were going to discharge him they would also give him to his partner, the old lady. They were very happy to know that they would leave the same day, as they were able to live this situation together from start to finish.

On the other hand, we have also experienced moments where sadness and nostalgia have appeared. This last week has been St. George's Day, a very important and special holiday for all the citizens of Catalonia. From the company of the Catalonia hotels they sent us roses and books for the patients with dedications written in them. We have to think that it is a pretty tough situation that patients have to live alone and separated from their family, so small details like these made them a little more levitating that day of admission to the hotel. I was moved by the case of a patient who unfortunately became a widow a few days earlier by the coronavirus itself, as tears came to her eyes when she received the rose and read the dedication with hopeful and emotional words that a person had written for she. We were very grateful for the detail and it was emotional to see how for a little while, we were able to brighten the day a little more.

If this situation happened again, would you hesitate to take a step forward or come to help in another way?

Yes, I would take a step forward again without any hesitation. I think it is essential to know the help we can provide and to know that as long as the necessary measures are taken, nothing serious or accident has to happen. It has been very comforting for me to get home at the end of my shift and feel that I have been helpful to someone or that I have collaborated in this time of health emergency.

Anyway, I totally respect all those people who have preferred not to put themselves in the front line but who have still been able to help and lend a hand in a different way. There are many jobs that are less visible and deserve the same applause and gratitude that receive those that do have more visibility for establishing more direct contact with the patient himself. For example, there are people who cook the food that will feed these patients, there are carriers who send us the material we need to serve people, there is a pharmacy service that provides us with the medication they need or there there is a cleaning service that is in charge of cleaning the sheets and clothes that these patients will use. What’s more, people who stay home and respect confinement are also helping in a very important way in this complicated situation.

What did I tell you?… Young, fragile, a great professional and a beautiful person!

All entries by: Eva A. Sánchez Martos
Of life without funnels
Of new professionals coming to the HaD. Andrea

The HaD patient Join in HaD Assistive system
This website uses cookies to improve your experience. We'll assume you're ok with this, but you can opt-out if you wish.Accept Read More